Arne and Ida's daughter, Esther Erickson married William Wendt and they were parents to my father, Dale Henry Wendt.

The above picture shows Arne standing to the right in the picture.  Ida is sitting holding baby Alfreda and my grandmother. Esther is the little girl standing next to her mother, Ida.  Arne's mother, Marta is the woman on the right hand side of the picture.  Marta came to Minnesota from Norway at the age of 67 since she was a widow and all her children had moved to Minnesota.

In the Digitized Parish records on the website Digitalarkivet, Arne Erikson Spetalen is shown leaving the Vinger Parish in Hedmark, Norway on April 26, 1871.


Arne Erickson died June 4, 1938 and this is his obituary:
Arne's obituary and death certificate say he was born 10-08-1852,  however the Vinger bygdebok and the Vinger, Hedmark, Norway church records show Arne's birthdate as being 10-18-1850.  We will believe that that is the correct date.


A native of Norway, the son of Erick and Martha (Anderson) Erickson, he was born 10-08-1850, and received the ordinary schooling given in his native land.  He worked on his father's farm until he was eighteen, when, realizing the more promising future in store for emigrants to the United States, he came to this country in 1871, landing in New York after a four weeks ocean trip.

He spent a week in Chicago, then went to Beloit, Wis., and from there to Clinton Junction where he worked for six months on a farm.  He came to Stevens County shortly after the county was organized and helped to build the railroad through Morris.  In 1872 Mr. Erickson spent five months in the employ of a wood contractor, cutting wood to supply the soldiers then located at Fort Sisseton.  Returning to Morris he again went to work on the railroad, which together with farming, he followed for the next six years.

In 1879 he took up a homestead of 80 acres, later added another 80 acres to it, and on this farm he made his home for the remainder of his life.

For many years Mr. Erickson served as treasurer of Rendsville township, and also served on the school board of his district.  He always manifested a keen interest in community activities and in the welfare of his neighbors and fellow citizens.  He was the last surviving charter member of the Kongsvinger Church which was organized in 1876, and served the church faithfully.  He enjoyed the confidence and good will of all who knew him and his example of industry and thrift was always noteworthy.

Mr. Erickson was united in marriage on May 30, 1875, to Miss Ida Anderson, the ceremony being solemnized in Nora church in Pope County. Mrs. Erickson passed away on November 11, 1907.

Funeral services were conducted Wednesday at 2 o'clock from the home and at 2:30 from the Presbyterian Church, Rev. Sverre Torgerson officiating.  The Kongsvinger octette sang at the services.  Interment was in the Vinger Cemetery.  The pallbearers were six grandsons of the deceased, namely, James Erickson, Albert Kurud, Melvin Edmonds, Norman Edmonds, Dale Wendt and Glen Wendt.

My great grandmother, Ida Olsdatter (Anderson) wife of Arne Erickson was born in Fjäll, Mangskog, Varmland, Sweden.
In Sweden on Ida's birth records and also in the immigrant records for Ida leaving Sweden she is called Ingjerd.  We are not sure why she called herself Ida here in America.  We will refer to her as Ida for all our records.

Death of Mrs. Arne Erickson (The Morris Tribune, Nov. 16, 1907)
Mrs. Arne Ericksen, of Rendsville, died at the Swedish hospital in Minneapolis on Monday, November 11th from cancer.  She had been suffering with the disease for some time and everything was done to effect a cure, but without result.

Deceased was the wife of one of the prominent farmers of the county.  She was born in Sweden and was 52 years of age.  She came to this country with her parents, Mr. and Mrs. Ole Anderson, about 35 years ago, settling in Pope county.  Thirty-two years ago she was married to Mr. Erickson, and since then they have made their home in Rendsville.  To them have been born eleven children, who with the husband, survive. The children are Mrs. Erick Kurud, of Donnelly, Albert Erickson, of Donnelly, Mrs. Walter Edmonds, of Lowry, and Olaf, George, Manda, Eddie, Ida, William, Esther and Alfreda all of whom are at home.  The youngest of the children is eight years old.

Her father and mother are dead, but she is survived by two brothers and three sister, Nils Anderson, and Emma Anderson of Eldorado, Mrs. C.W. Edmonds, of Morris, Mrs. Martha Nelson, of Park River, and Albert Anderson of Pope county.

The sympathy of many friends is extended to the sorrowing husband and children.

The funeral will be held from the Donnelly church next Monday afternoon at 2 o'clock.

(Morris Sun,  Nov. 14, 1907)   The sad news reached here last Monday night that Mrs. Arne Erickson had died at the Swedish Hospital at Minneapolis last Monday night.  The remains were brought here on Tuesday night and will be buried today from the Presbyterian Church.  Mrs. Erickson went to  Minneapolis about two weeks ago to seek medical aid for Bright's disease, but her case was hopeless.  We hope to give more of an account of this next week.

(Morris Sun, Nov. 21, 1907)   It is our sad duty this week to report the death of Mrs. Arne Erickson, who died at the Swedish hospital, Minneapolis, Monday evening, Nov. 11th, cancer of the stomach being the cause of her death.  She was brought to Minneapolis for medical aid but the dread disease was beyond control.  Her loving husband and son George were at her bedside at the time of her death.  The deceased was born at Sweden fifty-two years ago and came to this country with her parents and settled near Lowry, Minn., some thirty-five years ago. She was married to Arne Erickson thirty-two years ago and has lived on their now beautiful farm near Donnelly ever since.  Their wedded life has been blessed with eleven children who now mourn the loss of a kind, loving and patient mother.  Two of her daughters are married, Mrs. Erick Kurud of Donnelly and Mrs. Walter Edmonds of Lowry, and one son Sam Albert of Donnelly, is also married: the rest of the children are at home, the youngest being eight years old.

Her parents are dead but she is survived by two brothers and three sisters, Nils Anderson and Albert Anderson, both of Glenwood, Minn., and Mrs. Martha Nelson of Adams, N.Dak, Mrs. Nils Anderson of Eldorado, Minn., and Mrs. Edmunds of Morris, Minn.  Deceased had many friends thruout the country who sincerely mourn her loss and who extend to Mr. Erickson and family condolence in their sad bereavement. The funeral took place last Monday afternoon from her home to the Donnelly Presbyterian church followed by a large crowd of relatives and friends who had gathered to pay their last tribute of respect to the deceased.  Rev. Marks preached an impressive sermon.

The body which was placed in a beautiful couch casket was placed in front of the altar and beneath ribbons of black and white and covered with flowers, and the local choir sang some very appropriate songs.  The pall bearers were Mr. Hogeson, Ed Harstad, Christ Aanerud, and Mr. N. Johnson.  The floral tribute was numerous and handsome.  The interment took place at the cemetery north of town.

To the sorrowing and bereaved family we would invite a few words of comfort remembering the blessed words:
"Comfort ye one another." we are reminded by this dispensation of Providence that we are dust and to dust shall return.  It behooves us who are left behind to so live and serve our Redeemer, that when we are called to depart with this corruptible body we may be ready and prepared to receive in turn an incorruptible and undefiled body and one which fadeth not away, and that we may join with our loved ones in singing the praises of God.
Be not disheartened brother, In the dark and lonesome day, When the dearest and truest, From your arms is caught away.   The earth may be bare and silent, But heaven is just before, May your path lead up to splendor, And the love in it open door.

Jean's comment:  As time has gone on it has been proven that Ida very likely died from a hereditary kidney disease.  As time went on, Ida had several children and grandchildren who died from the disease and there are others in the family lines still dealing with the disease.  Modern medicine has helped the present generation live longer with it. 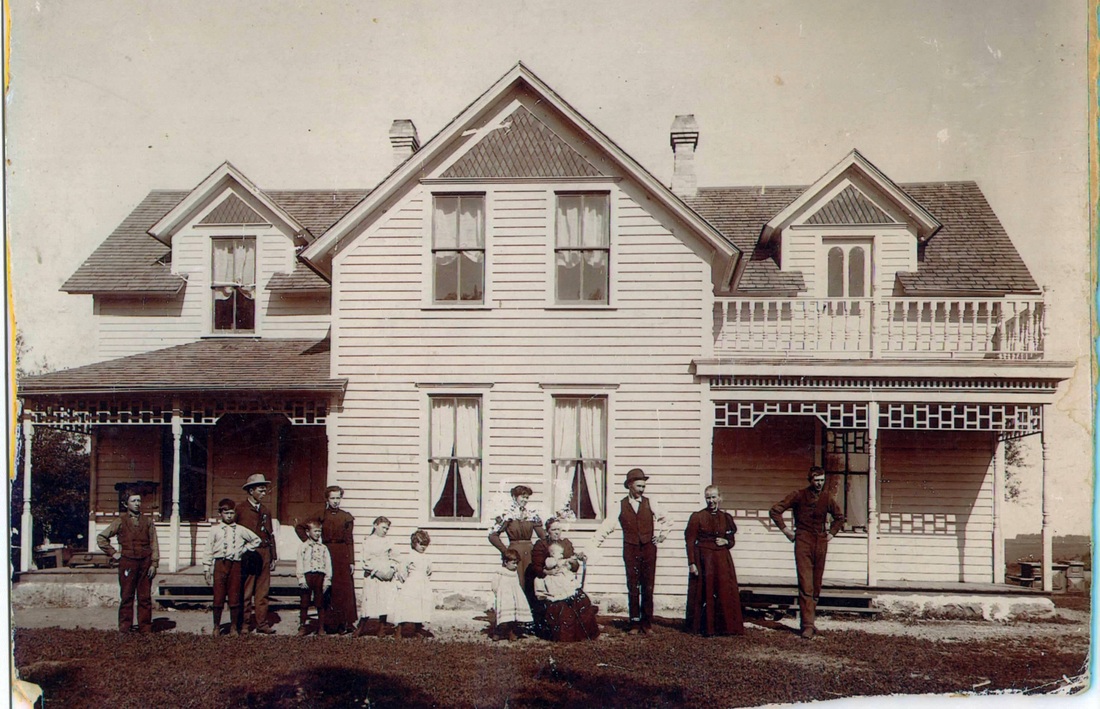 This is Arne and Ida and their children. On the right hand side of this picture we also have Arne's mother, Marta and a tall slender young man whom we do not know the idenity of. This picture is taken at the home of Arne and Ida on their farm which was located east of Donnelly, Minnesota. The house is still in use at the present time.
Proudly powered by Weebly