This is a story about my Great Great Grandfather, Klas Knutson Mosafinn who came from the Mosafinn farm in Voss, Hordaland, Norway.

Klas Knutson Mosafinn was baptized on January 12, 1812 in the Vangen Church in Voss, Hordaland, Norway. It is believed that he was born in December 1811.

Mosafinn has a number of different spellings depending where you look. It can be Mossefinne, Mosefine, Mosphind, Mossefinn. Also Klas is recorded a number of ways - Klas, Klaus, Claus For this record I am going with the Mosafinn spelling. (Jean) Klas' brother Lars' descendants still live on the home Mosafinn farm # 1 in Voss, Norway. It is on the shores of Lake Vangsvatnet (the word vatnet means lake).

Klas Knudson Mosafinn was born in Voss, Norway and immigrated to America in 1844. He left port at Bergen, Norway and came on the ship "Ornen", arriving in New York on August 2, 1844, having left Bergen 60 days earlier. Klas's nephew, Knut Torsteinson Lunde came with him. Klas left New York and went to Illinois. The following is the handed down family story we have on Klas: He worked in Illinois and sent money back to Norway for the girl he wanted to marry to come to America. She died of cholera 3 weeks after arriving. The story is that Klas then stopped to help a woman whose husband had been kicked by a horse. The husband died and Klas stayed to help her and after a while he married her.

After much research I discovered who this wife of Klas Knutson Mosafinn was. Her name was Anne Knutsdatter Ugland, from Froland, Aust Agder, Norway. Anne immigrated from Norway in 1850 and went to the Menard/Sangamon County areas of Illinois. (We are not sure if there ever was a husband for Anne before she married Klas since Anne came from the Ugland/Augland farm in Froland.) They supposedly had 5 children and Anne died shortly after giving birth to twins in 1861. The twins and two of the children named Peter and Maren died shortly after this also. Their son Knute was supposedly born in Menard County, Illinois. (This is according to Knute's obituary) Knute's confirmation record says his mother was Anne Knutsdatter.

There is a family living in Winneshiek County, Iowa in the 1860 census that I believe are Klas, Anne and Knute. We have no proof that this is them but they are living in an area of Winneshiek County where a lot of Vossings settled.

There is a story written by Edward E. Barsness that was published Thursday, March 29, 1962 in the Pope County Tribune, Glenwood, Minnesota that talks about Klas and his son, Knute and a visit from the Indians.
The story says:
In the last installment of our pioneer history we told the story of one Claus Knutson of Gilchrist Township and the hardships and tragedies  that came to him over a long span of years.  The records show he came to Gilchrist Township in the summer of 1863, a year after the Indian outbreak with his son Knute Clausen and settled in Section 28.  Knute Clauson married Dorthea Anderson who will be remembered for her services as a mid-wife, having delivered 280 babies born in that area. The Sioux Indians traveled through this area and an interesting story is told about three Indians that stopped at the log cabin of Claus Knutson one winter.  Their dogs pulled loads of muskrats and other fur-bearing animals.  When Claus asked why they carried the bodies of the animals as well as the fur, they replied that would be their winter meat.  When the three Indians stayed for three days due to bad weather, Claus offered them one of his cats, as he had too many, to be killed for dog food.  However, the Indians prepared the cat meat for their own meal and even requested that Claus have a taste of it too.  Since the dogs were in house, Claus managed to sneak the meat he was supposed to be tasting off to the side of the table to the dogs so that the Indians didn't notice it.

Klas was one of the founding fathers of the West Lake Johanna Lutheran Church which is located in the southeastern part of Pope County. He is also recorded as one of the first settlers in Gilchrist Township, Pope County, Minnesota. Klas never remarried and spent the rest of his life on the farm on the south shore of Simon Lake. He lived with his son, Knute until he passed away.  According to records at the Minnesota State Historical Society he died January 05, 1895. This is recorded in the Pope County, Gilchrist Township Death Register book at the Minnesota Historical Society in St. Paul, Minnesota. He is not recorded in the courthouse death records in Pope County. We are not sure where Klas was buried. He may be in an unmarked grave at the West Lake Johanna Church.

Klas' son Knute married Dorthea Nilsdatter Anderson Øddin who immigrated from Nord Aurdal, Valdres, Oppland in 1865. Dorthea came with her parents, Nils and Ragnild on the ship "Galathea". They first settled in Dane County, Wisconsin and then went to Pope County, Minnesota and this is where Knute met Dorthea. Knute and Dorthea had 9 children so Klas now has many descendants in the USA and we are proud to be considered "Vossings" and descendants of a "Vossing".

(We have no known pictures of Klas Knutson Mosafinn) 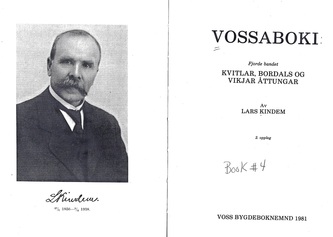 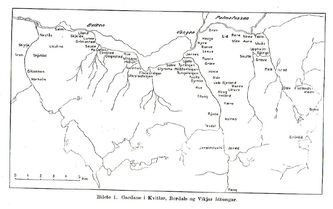 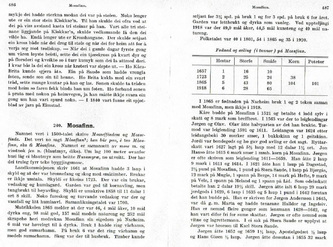 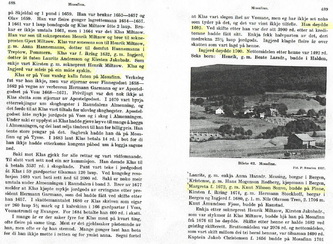 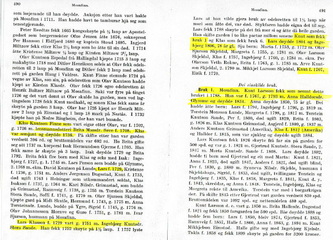 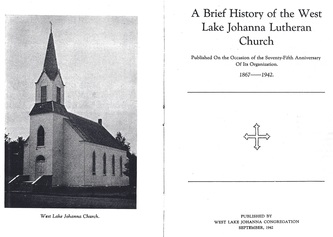 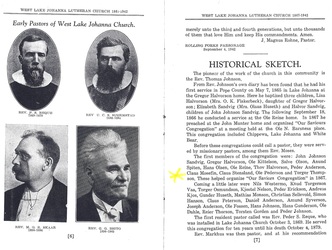 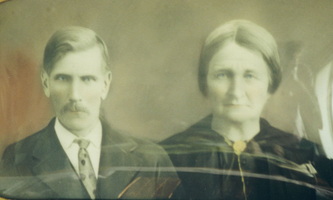