Here we have the family of my Great Grandparents, Ole J. Skarpness and Oline Olsdatter Gronseth.

They are sitting in the front row with their son, Albert in-between them.  In the back row we have Julius, Olaf, Joseph, George, Ludvig, John (my grandfather), Marie and Olga.

This is the story of a very proud Norwegian family. Ole J. Skarpness and his wife, Oline Gronseth Skarpness are the base of this family history. Ole and Oline were very strong, wholesome, industrious individuals. They are my great grandparents. I am descended from their oldest child, John O. Skarpness.

I will start with Oline since her family came to America first. Oline was the daughter of Ola Larson Gronseth and Mali Rollaugsdatter Krislok.

Ola and Mali were married June 20,1861in the Hegra Kirke.  (The family story always said they were married at the Nidaros Cathedral in Trondheim but I have seen the actual marriage record in the Hegra Church Registers).

Ola and Mali then lived on Øystre Grønset in Hegra. There they had two daughters born while living there:
Lisbet on February 2, 1862 and Gjertrud on December 14, 1863.

Very likely due to the poor economic conditions in the Hegra area at the time, Ola and Mali decided to immigrate to America. Going were Ola, Mali, Lisbet and Gjertrud, along with Lars, the son of Ola's brother, Rollaug, and his wife, Randi. Also with them were Mali's brother, Christopher Rollaugson Kristlok, and her nephew, Rollaug Haagenson Kristlok. They left Trondheim on the ship Victor on April 25, 1866 and arrived in Quebec, Canada on June 9,1866. The ship had 313 passengers of which 94 were children and 16 were crewmen.

Once they came to Quebec, they made their way to Minnesota to Goodhue County. We believe they lived in the Wanamingo- Zumbrota area. They lived there about four years and then moved to a homestead west of Sunburg in Swift County, Minnesota. While in Goodhue County they had two more children. Oline was born August 31, 1867 and Rollaug (Rolog, Ralph) was born March 22, 1870. It is said that Rollaug was born in Goodhue County so presumably they came to Swift County shortly after that, possibly in 1871 with Ola's brother, !ver.

Unfortunately for the family, Minnesota had some very harsh winters. Blizzards came up very suddenly. The Willmar Republican newspaper from 20 February 1872 reports the following:
Another of those terrible storms of the present winter was repeated last week, commencing in the afternoon of Monday and lasting until Tuesday night. In some respects it was more severe than its predecessors. Although the mercury at this point was not so low as it was during the heavy storm, which preceded this, it has been very destructive.

We hear from all quarters of large numbers of cattle freezing to death. Nor has human life been spared. We have heard of one man freezing to death at Swede Grove, but learned no particulars.

Conductor Fitzgerald's train going west was stuck in the snow near Hancock and seven of his men badly frozen. We have also heard that a man in the northern part of Norway Lake was out with his team, four yoke of oxen, and losing his way, both he and his oxen were found after the storm, frozen to death.

This man was my Great Great Grandfather, Ola Larson Gronseth. He died on February 13, 1872; his life in America cut short by a Minnesota blizzard. He was only 46 years old and left behind a young wife and four small children.
Mali, being left a widow with four small children, must have had a terrible life out on the prairie. Fortunately for her, Ola's brother, Iver, lived on adjoining land. I would assume that he helped the family survive.

Mali then met Christopher Knudson Thorseth (Tørset). He was from Aure, Møre og Romsdal, Norway. Christopher was a widower and had come to Minnesota from Norway, leaving Norway in May 1869. He brought with him his parents and two of his children. All five of them arrived safely in New York. However, there are no records found stating what happened to the parents and little daughter Beret. Christopher and his son, Ole, age three, then went to Norway Lake Township where Christopher's brother, Christen Knudsen lived.

Somehow Mali met Christopher and they were married. The marriage certificate states that they were married in Swift County, Minnesota on March 13, 1873 by Pastor Lars Olesen, with Thomas Osmindsen and Osmind Iverson as witnesses.

Mali and Christopher lived on the Gronseth farm and raised Mali's four children, Christopher's son, Ole, and had four more children together. They were: twins, Olaf and Bertha, Johannes and Martin.

We are not sure where Ola is buried; however, it is believed he may be at the old Norway Lake Lutheran Church ( the Old Log Church). There was a funeral service held in July of 1872 for an Ole Larson. There were three funerals that day. It may be that it could be Ola and this was a day the pastor was in the area to conduct the funerals. Mali and Christopher are both buried at the Spring Creek Lutheran Church Cemetery.

Ola and Mali's daughter, Oline, is my great-grandmother. She married a strong, hardworking man from Norway by the name of Ole J. Skarpness.


Ole J. Skarpness was born on the Island of Smøla, on the North Sea, off the coast of Norway near Kristiansund in Møre og Romsdal. He was born August 20, 1861 on the Skarpness farm. In the Smøla Bygdebok Ole is listed with middle name of Nicolai. I believe when he came to America he started using the middle initial J. for his father's name, which was Johan. Ole's parents were Johan Johannesson Stensønes and Johanne Olsdatter Skomsø. Ole was their second child. The family lived on the Skarpness farm.  In 1904 the farm they lived on was separated from the big farm and became the Framnes farm. Ole's brother, Iver, who stayed on the farm, took Framnes as his last name when he became owner in 1904.

Living on Smøla you made your living by being fishermen. It was a dangerous occupation with the storms and rough water. I would presume that Ole and his brothers, Johan and Peder, all came to America to get away from the hard and dangerous work of fishing. In doing my research I came across a statement in the Smøla Bygdebok Bind 4 about Ole's grandmother, Johanne's mother, Ana Karlsdotter (Ytre) Skomsø. It says she died in 1861 at the age of 59 years. She perished on the Edøyfjorden October 18, 1861 and was buried November 2. Ole would have been two months old at this time. It must have been a sad time for his mother.

Also, the dangers of the sea and water can be witnessed again by other part of the Smøla Bygdebok Bind 4. It states that Johanne lost her brother Ole and her father's brother, Johan, at sea. It reads:  ‘Ole born 1838. He perished at sea October 9, 1849 along with his father’s brother, Johan. (Ole f. 1838. Han omkon pa havet Oktober 9, 1849 saman med farbrorenJohan.)"  Also Johanne's
brother-in-Iaw, Peder, perished at sea December 1, 1852.

OIe and his friend, Jacob Roget, who was also from the island of Smøla, came to America in 1882. They are shown in the passport records for Kristiansund, Møre og Romsdal, Norway. They left Norway on May 31, 1882 on a ship of the Stjerne ship line, with tickets paid through to Illinois.

Ole’s obituary says he came directly to the Norway Lake community near Sunburg, Minnesota. Ole and Jacob purchased land side by side and they married sisters. Jacob married Elisabeth Gronseth on November 16, 1884 and Ole married Oline Gronseth on November 27, 1885. An interesting story about Ole and Jacob was told to me on June 20, 2001 by my aunt, Florence Skarpness Spaanem, age 86. She said "Jacob's oldest child, Ella Roget, born in 1885 and Ole's oldest child, John Skarpness, born in 1886 used to do field work on their own farms with their teams of horses. Being first cousins they enjoyed visiting, so they would always go to the fence line to visit with each other and let the horses rest.

Ole and Oline donated the northwest corner of their land for the building of a church. Ole was a founding member of the Spring Creek Lutheran Church, which was built there. Sunday school was started there in 1910 with Ole as the first instructor. He was also the klokker (song leader) for 25 years and the church secretary from 1906-r931. Ole and Oline, Jacob and Elisabeth, and many of their children are now buried at the Spring Creek Lutheran Church Cemetery.

Ole and Oline (Lena) had nine children: John, Olaf, George, Marie, Julius, Olga, Ludvig, Joseph and Albert. They built themselves a beautiful farm; it had a big barn and huge house. Ole and Oline were proud farmers and kept everything neat and clean. They had apple orchards, walnut trees, a huge garden, etc. Oline was known for her very immaculate house.

I am told you could see yourself in the shine on the floor. I am very intrigued by the house. I was upstairs recently and I love the layout of the rooms. In their day they were showcases, with
beautiful wallpaper and lace curtains. The farm is still owned by a Skarpness. The present owner is Joel Skarpness, son of Ole and Oline's son, Julius. The buildings are all still there.

Ole's brother, Johan, came to America and he went to the Red Wing Seminary and became a Lutheran Pastor. As a pastor he served churches in South Dakota, Illinois and Iowa. His brother, Peder, came to America and worked for Ole for about six or seven years, saved up enough money and then bought his own homestead in North Dakota in about 1901.

Ola, Mali, Christopher, Johan, Johanne, Ole and Oline, and all their children are held in very high esteem by their descendants. We are all very proud of the trials and triumphs they survived. I am not sure if I could have survived all the hard work they went through to make us American citizens and provide us with the lives we now have. 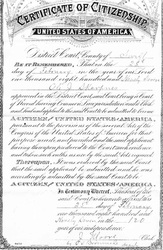 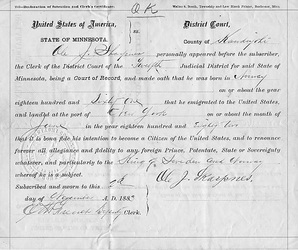 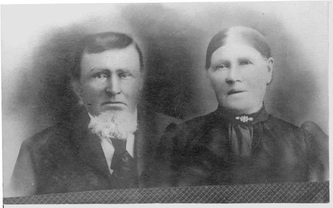 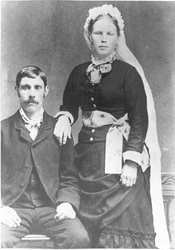 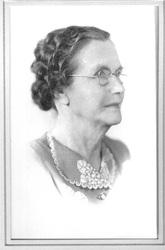 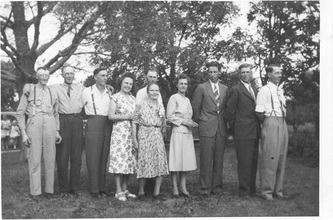 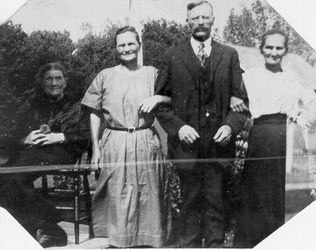 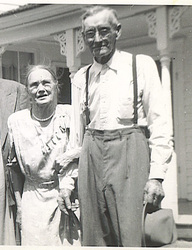